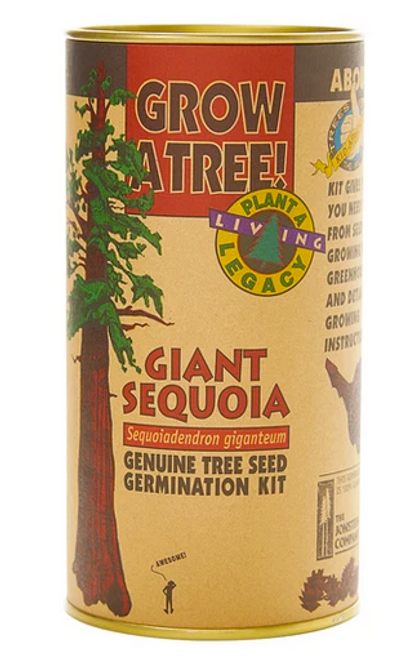 Giant Sequoia is a member of the former Redwood Family, Taxodiaceae, a group of evergreen (and some deciduous) coniferous trees which were abundant in forests throughout the world during the mild, humid climate of the Miocene Period (about 13 million years ago). Over the millennia, many species in the former Redwood Family have become extinct, but there remain 15 species growing today in locations from America to China to Tasmania. Among these ancient species, Giant Sequoia (Sequoiadendron giganteum) is the undisputed king.

Giant Sequoias are our planet’s most massive living things; their size and majesty are awe-inspiring and utterly without equal in the plant kingdom. Visiting an old growth stand of Giant Sequoias is like walking among mighty columns supporting the cathedral of the skies. Indeed, no tree species in the world has sparked as much interest, reverence, and awe as the Giant Sequoia (a.k.a. Sierra Redwood or Big Tree). It's been called the "monarch of all conifers," "godlike giant of the Golden Age," and the "climax of American vegetation."

Giant Sequoia seeds are among the tiniest in the tree world, yet the trees which grow from them are the largest living things on earth, past or present. Ancient Giant Sequoias climb to heights of around 300 feet, and have massive, cinnamon-red trunks nearly 40 feet in diameter. These "vast structures of antiquity" have life-spans of more than 3,000 years, longer than any tree except the Bristlecone Pine. A hardy species, Giant Sequoias can grow in a surprisingly wide range of climates.

The Giant Sequoia is a mountain tree, growing at up to 9,000 feet in elevation. It is native exclusively to a very limited range along the western slopes of the Sierra-Nevada mountains in central California, where winters are cold and snowy and summers are hot and dry. Despite its limited natural range, the Giant Sequoia is a highly adaptable species. It is both cold hardy and heat tolerant, and can grow almost anywhere in the United States.